When summer arrives at the University of Illinois Urbana-Champaign and undergraduates go back to their hometowns, a perfect opportunity arises for other, much younger students to take part in the college experience in a way that reaches beyond a typical campus tour. 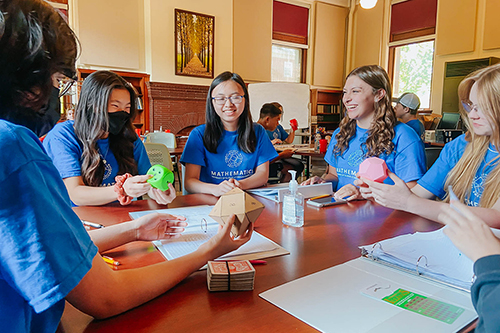 While many camps occur every summer on campus, we recently visited two that occurred roughly the same time: the Summer Illinois Mathematics Camp (SIM) and Arabic High School Program, which this summer returned to their in-person format after two years of virtual meeting.

Students who attended the SIM Camp, hosted by the Department of Mathematics, spent their days on campus doing a variety of activities designed to expose them to college level math concepts for a week. On the final day they took the more traditional college tour before parents came to pick them up.

The SIM camp met in two groups in Altgeld Hall, where the Department of Mathematics is housed. The groups included Camp Epsilon, for middle schoolers through ninth grade, and Camp Delta for rising 10th-12th graders. More than 50 students attended the camps.

“Coming from a small town like I do, I needed this exposure,” said SIM Camp Delta student Haylee Barnard. “Just being on a college campus is critical, it’s a bonus to the stuff we learn.”

The camps differed slightly, with Camp Epsilon students focusing on the representation of integers as sum squares, whereas Camp Delta students learned about counting with symmetries. However, both groups learned about game theory—a branch of mathematics that analyzes competitive situations where outcomes depend on a series of choices and reactions. 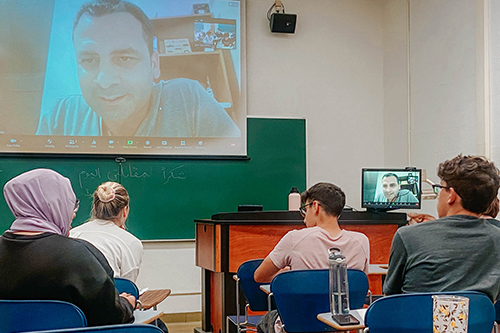 Students at the Arabic High School program speak virtually with man in Lebanon during their summer camp. (Photo by Christian Jones.)

Mathematics graduate student Meghann Long instructed the portion of the camp about games called “How to Maximize Your Winnings.” Long taught students how to calculate the probability of rolling Yahtzee, how to play the game of nim, a subtraction game, and how to make the best decision to make when faced with the “Monty Hall Problem” like those on the classic TV game show, “Let’s Make a Deal” (with participants asked to open one of three doors with the chance of winning a prize).

“I really enjoyed being exposed to college level math right now even if I don’t completely understand it yet,” Camp Delta Student Alana Dolan said, “It’s not intimidating in this environment because it doesn’t feel like a class.”

On the other side of the Main Quad, at the Foreign Language Building, the 19 high school students who were enrolled in the Arabic High School program chatted with a Syrian refugee in Lebanon, as he told them how to say different greetings and showed them how their names would be written in Arabic.

The program places students in a university dorm for two weeks as they are immersed in an Arabic speaking community of staff and faculty. The students learn not just the Arabic language, but also about Arab culture and cuisine.

Run by Eman Saadah, teaching associate professor and director of the Less Commonly Taught Languages Program in the Department of Linguistics, instructors are encouraged to engage and challenge the students in this intensive introductory course that offers two college credits.

“The feedback from parents is something that has kept us going,” Saadah said, “They tell us that their kids are better when they come home, and in the past two years we haven’t been able to bring them here.”

She added: “Doing the camp virtually wasn’t the same, so we wanted to bring it back on campus as soon as they would allow us. There is risk but we’re taking all the necessary precautions to avoid spreading COVID. We think it’s worth it for the students to get this full immersive experience like in the past.”

Keeping dozens of high schoolers on campus for two weeks is a daunting task logistically, but support from Qatar Foundation International provided  the students scholarships to attend the camp at reduced rate.

Students’ reasons for attending the camp varied from aspirations of moving to an Arabic country to work as a translator to traveling to Tunisia to visit the set of “Star Wars: A New Hope.” No prior experience with the language or culture is necessary.

“I wasn’t interested in Arabic specifically, but I speak some Hebrew and the connection was enough for me,” said high school junior Isaiah Ring. “Learning a language gives you a better understanding of the people, and Arabic specifically will help me understand Hebrew better so that’s a plus.”

While the students did spend time in class, they took regular breaks to go on field trips, play games, or even watch movies. And in the evening, they were treated to a traditional dish from an Arabic speaking country, such as Bechamel, a traditional Egyptian dish made with pasta, onion, and ground beef, prepared by the program instructors themselves.

“It’s no surprise that the students are thoroughly engaged,” said James Hye Suk Yoon, head of the Department of Linguistics.  “We put the best, most experienced instructors on the high school program, and it’s had consistent success.”