Profile of the Hindi Language 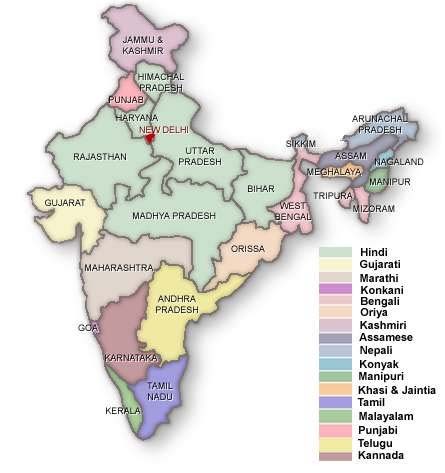 After Maithili becoming a national language (included in the VIII Schedule of the Constitution of India along with 21 other languages), Hindi now has 48 officially recognized dialects (Census of India, 2001).

Hindi and Urdu languages have their origins in Khariboli spoken in areas around Delhi. Khariboli was adopted by the Afghans, Persians, and Turks as a common language of interaction with the local population during the period of Islamic invasions and the establishment of Muslim rule in the north of India between the eighth and tenth centuries AD. In time, it developed a variety called Urdu with significant borrowings from Arabic and Persian and that uses the Perso-Arabic script.  It was also known as extra “mixed language.”

As Urdu gained patronage in the Muslim courts and developed into a literary language, the variety used by the general population gradually replaced Sanskrit, literary Prakrits, and Apabhramsas as the literary language.  This latter variety looked to Sanskrit for linguistic borrowings and Sanskrit, Prakrits, and Apabhramsas for literary conventions. It is this variety that became known as Hindi.

Hindi and Urdu have a common form known as Hindustani, which is a Hindi-Urdu mixed language.  Historical and cultural processes and the linguistic affinity that exists in Indian languages led to the emergence of Hindi-Urdu or so-called Hindustani as the lingua franca of major areas of India long before its independence.

Hindi was the language that was adopted by Indian leaders as a symbol of national identity during the struggle for freedom.  Hindi has been used as a literary language since the twelfth century.  The development of prose, however, began only in the eighteenth century, which marks the emergence of Hindi as a full-fledged literary language.

Grierson (1906) has divided Hindi into two groups:  Eastern Hindi and Western Hindi. Between the Eastern and the Western Prakrits there was an intermediate Prakrit called Ardhamagadhi.  The modern representative of the corresponding Apabhamsa is Eastern Hindi, and the Chaurasia Apabhramsa of the middle Doab is the parent of Western Hindi.  In the Eastern group, Grierson discusses three dialects:  Awadhi, Bagheli, and Chhattisgarhi. In the Western group, he explains five dialects: Hindustani, Braj Bhasha, Kanauji, Bundeli, and Bhojpuri. Eastern Hindi is bounded on the north by the language of Nepal, and on the west by various dialects of Western Hindi, of which the principal is Kanauji and Bundeli. On the east, it is bounded by the Bhojpuri dialect of Bihari and by Oriya. On the south, it meets forms of the Marathi language. Western Hindi extends to the foot of the Himalayas on the north, south to the Jamuna valley, and occupies most of Bundelkhand and a part of central provinces on the east side.